Where Sickles Go To Die 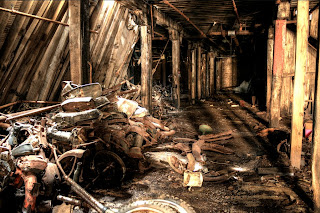 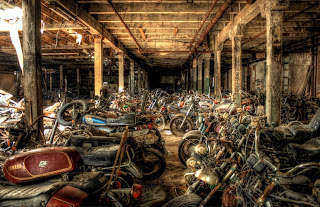 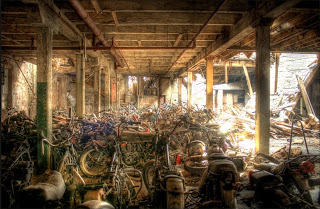 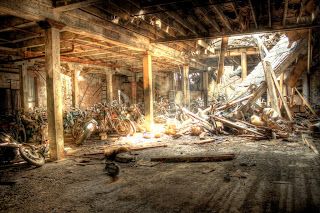 These photos are part of a gallery exhibit at the University of Rochester, in Rochester, NY. All of the photos are of abandoned places around Western New York. There are many abandoned buildings in this area due to rapid economic/infrastructure changes in the last century. The replacement of the Eerie Canal with the New York Thruway, the collapse of film photography, and over-development before the recent recession left the area with lots of empty buildings and no reason to replace them with something new.

I'm told the motorcycles used to be at a place called Cole's on the north side of the Erie Canal but got moved to this site when urban renewal started along the canal. The owner apparently died in the 1970's, and now the motorcycles have just been left there to rust. I'm not sure who owns the place now.

I didn't have much time to take pictures there, as we had many other abandoned sites to see, but it's really a huge place, three stories, and just brimming with antique motorcycles and parts. The pictures are all taken on the second, and most structurally stable floor of the building.

The motorcycle graveyard, as my friends and I are now calling it, is definitely one of the most eerie, strangest places I have ever been, and i think these pictures really speak to the tendency for old things to be forgotten in america, especially in rural areas, where a building can lay unoccupied for decades.

PS. The original non-hdr pictures were on a failed hard drive, so it took me a while to find them. The original photo project had to be all HDR, but here's the originals.

Please contact me at seward dot chris at gee mail dot com for prints or publishing.
Posted by Motorcycho

I feel like a scavenger looking at that. I want to go wherever this is and bring things home.