People are animals, we are creatures of habit. Some people meticulously fold their socks a particular way and line them up in a row, others leave them in a pile on the floor and grab two, matching or not, on their way out the door, and everything in between. The man with the tidy desk at work has a tidy bathroom at home. The person with an empty sink but a counter covered in dirty dishes buys his snow tires after the first fall. The important thing is to remember there isn’t a “right way” to live. It takes all kinds to both compliment and contrast each other. Giving us purpose, inspiration, identity and validating our spin of the wheel at this game of life. Whether we are five minutes early for everything or always late. A thinker, a dreamer, neat, careless, indecisive, efficient, quiet, loud, clumsy, whatever, it doesn’t matter. Regardless of what we do, there is one truth we can count on.... how we do one thing is how we do everything... and MANWOLFS KICK TO KILL! 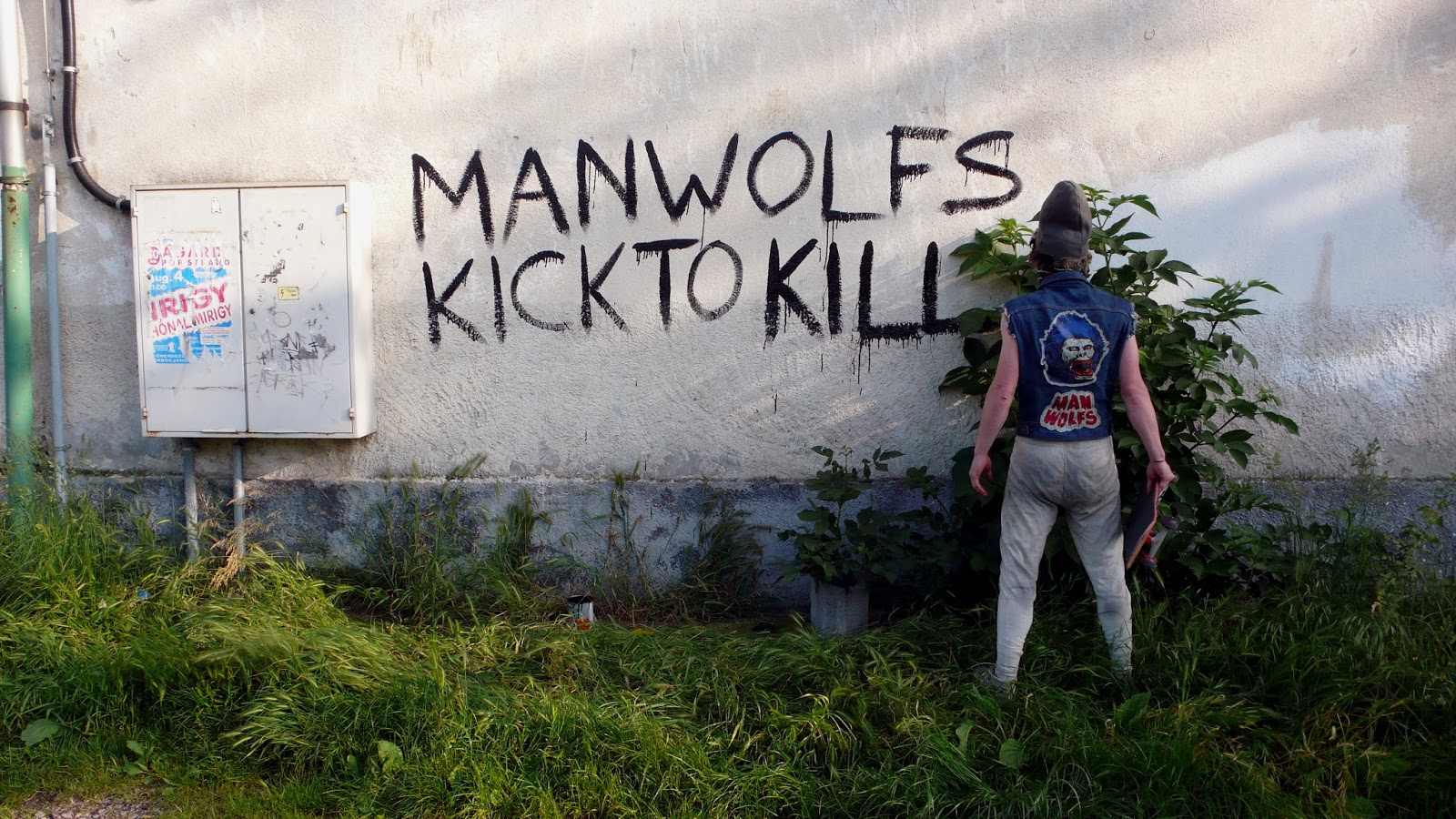 Give us a brief history on the ManWolfs (or is it ManWolves?)
Wolf 1:  Man and Wolf have held a close relationship since the dawn of time. To some men, wolfs were merely a tool in the development of conquering nature and the ego boom of our late antiquity.  But to others, the relationship was far more symbiotic and natural. Wholesome, for want of a better word as the term zoophilia had yet to become common parlance. In particular there was a group of nomadic heathens from northern europe who maintained that if the base essence of Man and Wolf were combined then the super natural forces of each would be distilled and intensified. For millennia these tribes, or packs as they became known, roamed the wilds performing acts of savagery but also beauty in equal measures. It wasn’t until 300BC in ancient Rome, when the act of boy buggery was popularized, that the Man Wolf tribes were forced underground in to what became known as the Peccatum Sodomiticum, which literally translates as ‘the sin of sodom’. The Roman Caesars had come to believe that the chastity of a half boy half beast was more worthy of conquest that that of a regular human child and so the Man Wolfs and the community that surrounded them was driven back in to the dens and the recesses of society. Infuriated the Caesars set out to systematically destroy the culture and all that surrounded it, along with most of what we know about this once great warrior tribe.
Wolf 2:  Value Village wig section 1982. Fathers with denim and polyester too tight for healthy semen. In other words Mutant genes. Too many rednecks, in town, old and young, luckily for the world, always causes a rebellion/diversity.
Wolf 3:  The Manwolfs was started, unwittingly, by a child hating, money hungry, roller skater Named Randy Harris. Randy, in an attempt to exploit young men in a small hamlet in British Columbia’s lower main land, while also brainwashing them away from their beloved pass-times of skateboarding, art, screaming, and setting fires, and towards his greatest loves, money, quiet afternoons, and roller skating, without knowing it,created the two greatest gathering places of raw awkward fury that this country has ever known: Grinders and The Skate Ranch. These were the breading grounds for for what has blossomed into pure terror in the present day. It is interesting to note that there may have been other Randy’s sprinkled across the globe, as the most untameable of these still troubled young men have gone on to build the MW’s with dedicated and like minded miscreants from as far as the great land of Scotts.
Wolf 4:  Its ManWolfs. Ha! Actually, I don't even know, is it man wolfs? or MANWOLFS?... My jacket has 2 words, but it reads better in type as one. We’ll go with that. Just with an “F” like its only one,  only there’s a bunch of them, a whole pack of lone wolfs. Everyone really has their own history of the ManWolfs. The truth is every one was too busy or just simply didn’t give fuck enough to write it down. So this IS history... in the making, that is. I’m probably wrong here but I think it goes; wolf heads, wolf pack, wolf patrol and currently ManWolfs. Thanks for caring. 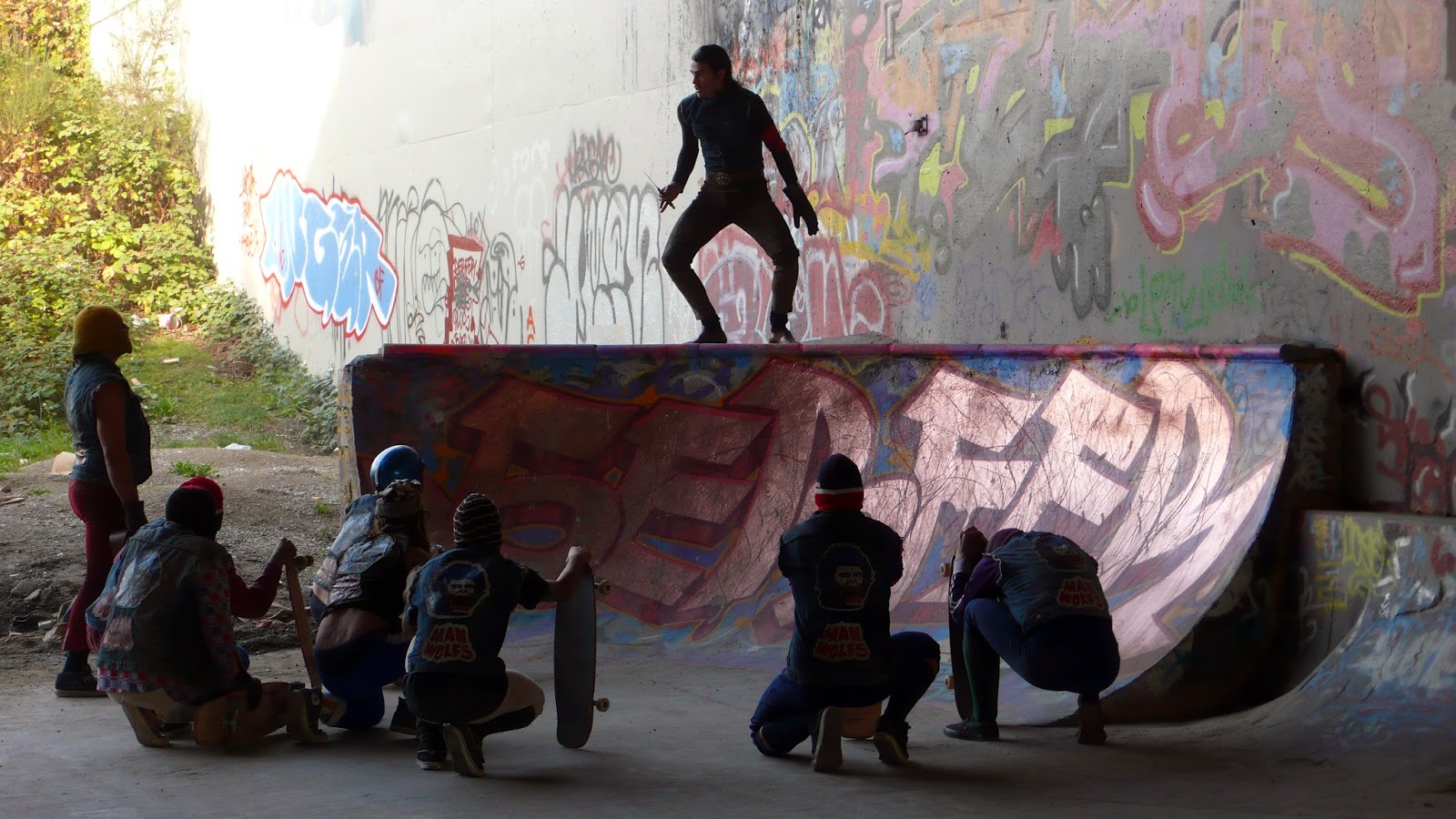 How does one become a ManWolf? Does the phrase ‘Many are called, but few are chosen’ apply?
Wolf 1:  Yes I believe that phrase would be apt. The mystic poet, Aleister Crowley, also known as The Great Beast, was possibly the last true propagator of Man Wolfs. He died in 1947, but during his lifetime he spent a year performing a complex a medieval ritual known as Abramelin, with the sole purpose of Man Wolf resurrection. He never completed the ceremony.
Wolf 2:  You become a manWolf when they say you become a manWolf.
Wolf 4: I wouldn’t say that.I don’t think anyway, no one that would be “chosen” really cares about manwolfs it doesn’t seem. Most ManWolfs dont really fly their flags unless called upon. In fact its more like the opposite, people of all walks ask where you get a patch or how you get in. But they probably wouldn’t get one anyway, although there have been exceptions to that. few were chosen ya... isn’t by limited numbers of patches only, not by any specific quality. Quite simply there aren’t any left. If you got one.... you are a ManWolf to someone. If you dont got one... you probably aren’t gonna get one. Although somehow, one last patch always seems to just keep popping up for the right dude. So there you go. Even that rule isn’t a rule... no rules, I like that. 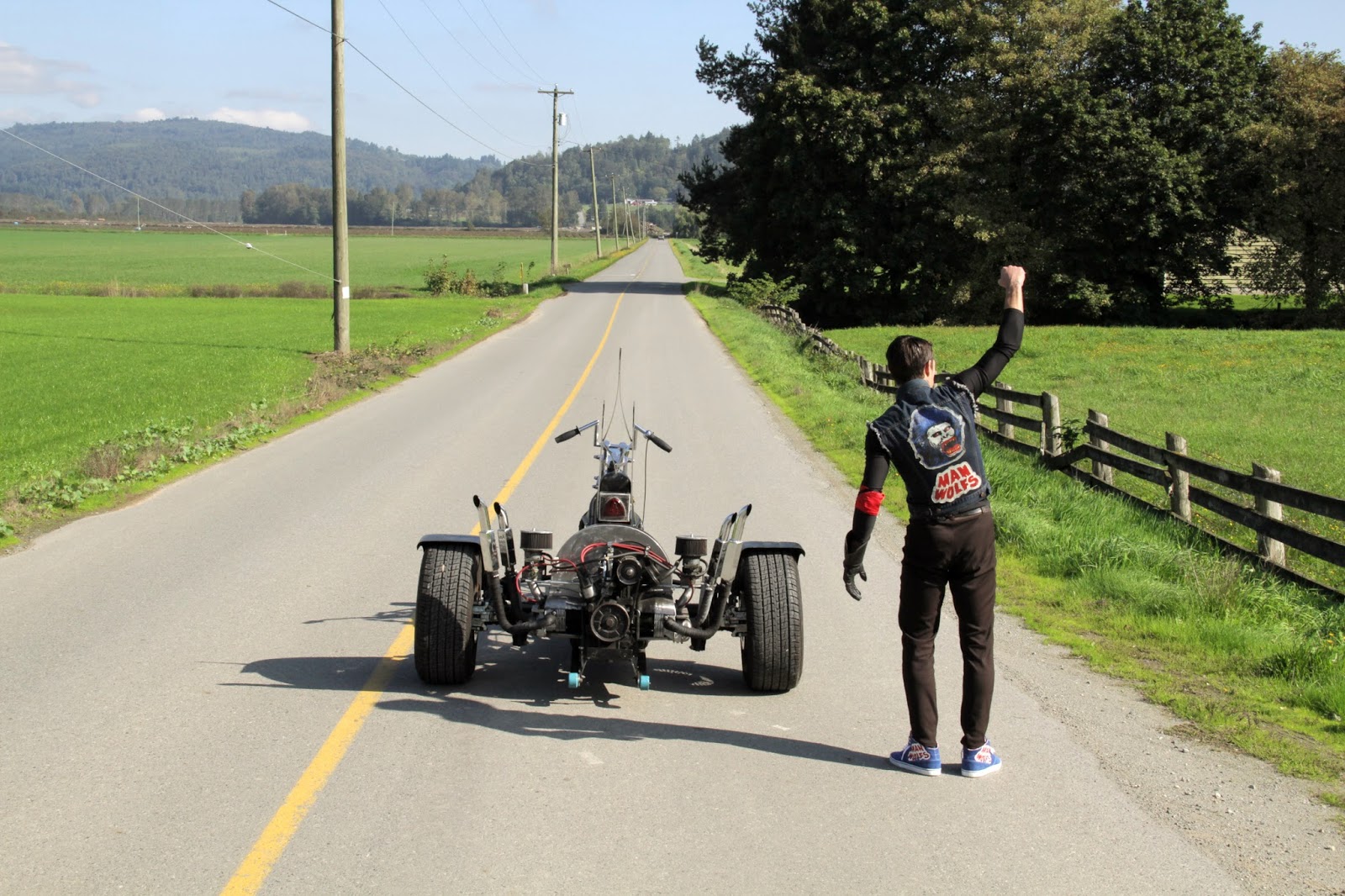 Is the ManWolf a Myth or a Legend?
Wolf 1:  Myths, Legends, these words are mere abstractions. How can something be if it hasn’t already been. 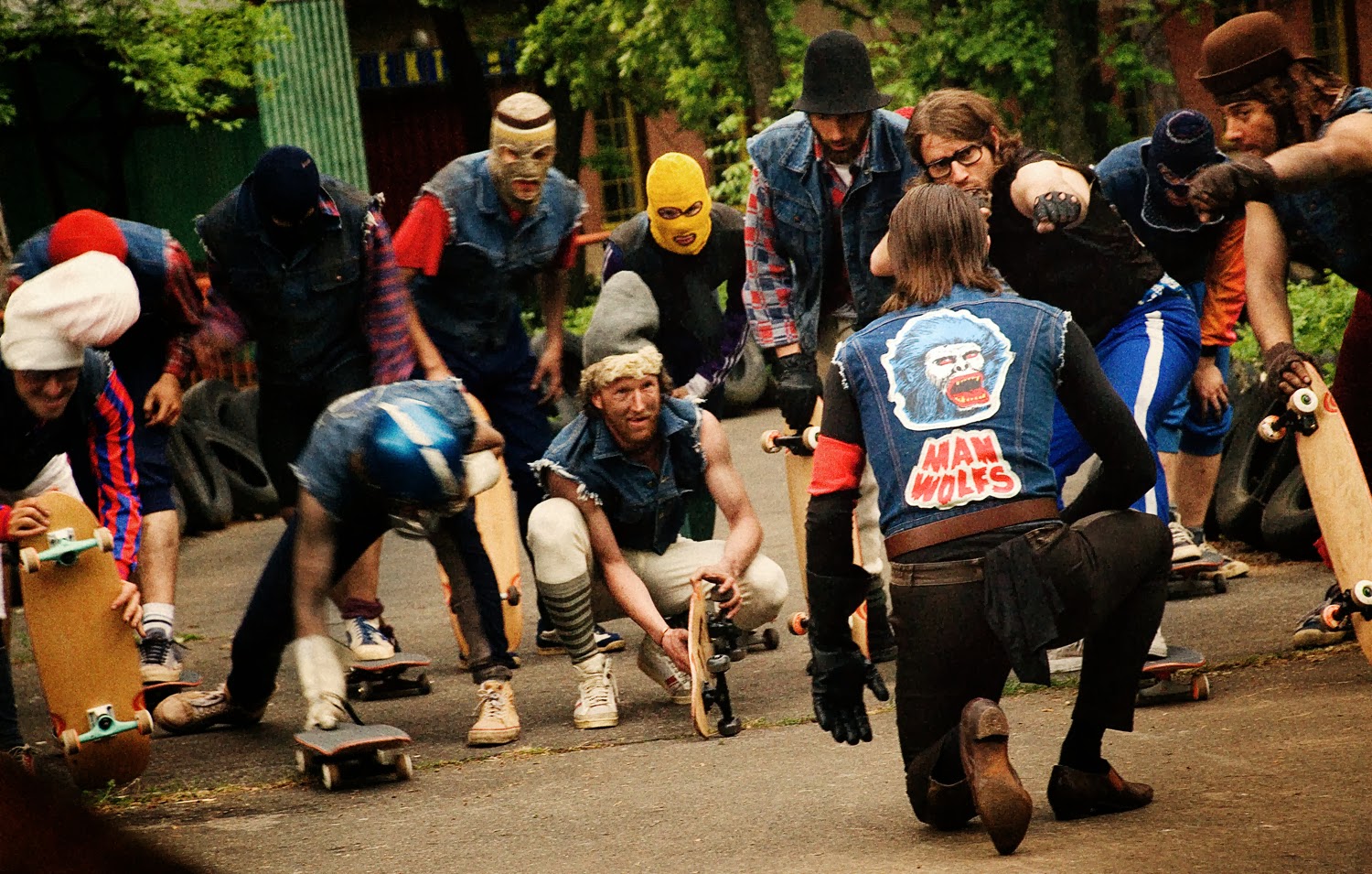 I do believe there was a brief appearance of the ManWolfs in a movie, Can you tell us more about that?
Wolf 1:  There has been many depictions of Man Wolfs over the ages, from rudimentary cave drawings in the Basque country, to the great tapestries of Ürümqi. All have a perceived notion of what a pack of Man Wolfs was able to manifest within their own time and place. History tends to paint itself in two dimensions. And so here we are today and along comes a movie picture and of course - tribe turns in to gang, wool in to denim and head piece in to balaclava. They are more or less a group of bastards. Cheap, vacuous, disposable heros with a surface value grotesquely disproportionate to that which lies beneath.
Wolf 4:  Corey Adams and Alex Craig. They are fucking amazing individuals, for many like and opposing individual reasons. the jacket patches first appear in a short film Harvey Spannos. I think  you should see it. Ok I’m pretty sure the list is; Werewolfs On Wheels, Of Wolf and Limb, Harvey Spannos, Machotaildrop, there was a remake of a 60’s propaganda film called “The Devils Toy” made for the NFBC.. I dunno if it came out.... Oh ya, and the G&S video “footage” from 1990. Believe it! 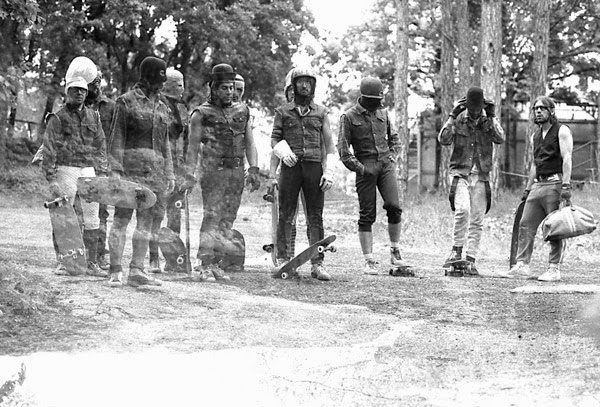 Manwolfs - Mens Fraternal Organization  or Gang ?
Wolf 1: It’s just ManWolfs... mystery to the unincluded.
Wolf 4: The Fonz was in a gang at the beginning wasn’t he?  Did he quit? He never hung out with the gang. Just nerds like Ralph Malph. Thats why he was cool I think. He did what he wanted regardless of what was cool. Nothing is cool. 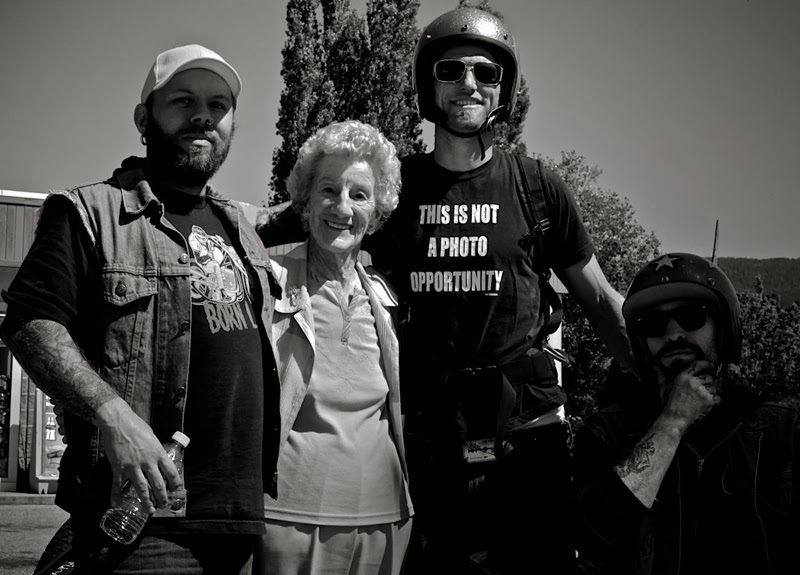 Skateboards and Sickles:  Why has the sk8 crowd been so drawn to the sickle community. Are the MW just another bunch of van wearing skater dudes rider bobbers and flipping up the brims of their baseball hats?


Wolf 1: We could spend all night talking about society and its structure, subcultures, fashion, the impact of the internet, etc and still be no closer to understanding why a very small percentage of motorcycle enthusiasts 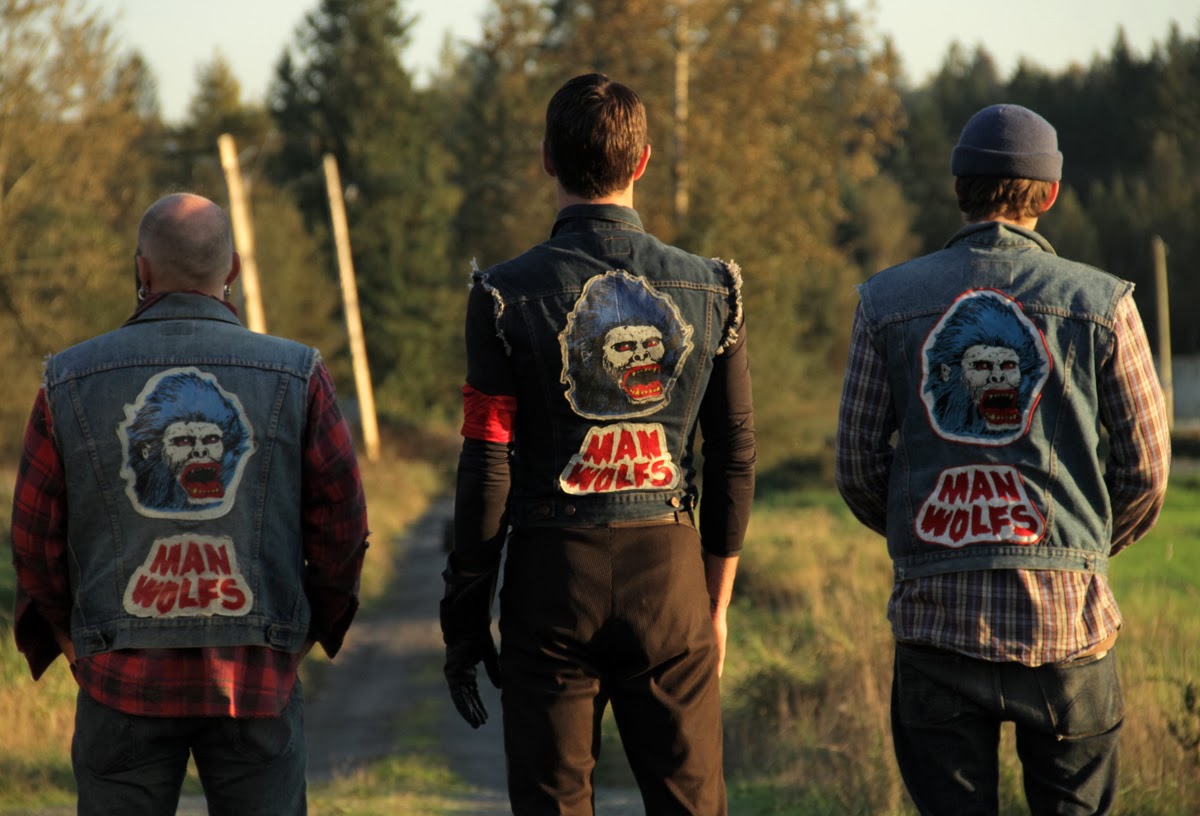 Email ThisBlogThis!Share to TwitterShare to FacebookShare to Pinterest
Labels: ManWolfs