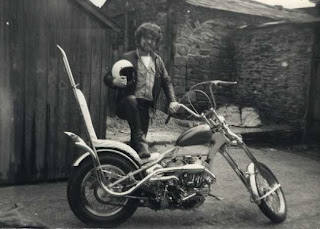 Al has been around bikes his whole life. Now, retired, he spends time between Vancouver, L.A., and Scotland. He currently owns 2 Indians, a Norton, a Super Vee and a Suzuki. He contributes fiction regularly to BSH Magazine. He sent us this from the Dave Mann Chopperfest.


CHOPPERFEST 2010
December 12th at Ventura County Fairgrounds, and the bikes rolled into Seaside Park under 85-degree sunshine. Flying down to L. A. to spend the festive season with my 91 year old father-in-law, we bump into Mark and Dean who tell me about the 7th David Mann Chopperfest. They had the Rogue stand there, having sent swap meet items ahead, and urged me to attend.
Now, when I cleared out my old ‘Easyriders’ I’d kept the Mann centerfolds, a select few decorating the garage walls as I’m sure many chopperheads have. Before Hamming, Robinson, and Knight, David Mann’s art immortalized the biker lifestyle, as indeed he lived it till his death in September 2004. Chopperfest, started by Dave ‘Huggie’ Hansen (‘The Shop’ vintage bikes, Ventura), featured a display of his original artwork as well as bike displays and swap meet, with thousands of enthusiasts in attendance (3,500 last year despite heavy morning rain). Large signs at the turnstiles prohibited specified club colours. This apparently didn’t include the ‘Cuntslammers’, whose back patch featured a sexy Little Red Riding Hood being stalked by the Big Bad Wolf.
Display bikes included Roger Herbison’s ’36 Chief, stock apart from a Keihen c.v. carb, with a ‘Laughing Indian Riders’ sticker (I’m club sec) on his helmet. Lots of ol’ skool & cool chops, mainly Knucks with fancy paint on tiny tanks (one inscribed ‘Know ye this is the Kingdom of Kicks’ from an old Mann centrefold), vestigial seats and scary forks minus front brakes. ‘Ventura Motorworks’ in particular had a fine selection of Knuck and Pan vintage custom chops, their speciality. ‘Kiwi Indian’ had a stand too with several of his repro Chiefs, including a board track-themed model. Not forgiven him for suing the ‘Laughing Indians’ after our readers’ poll slammed his unreliable transmission gears. It cost our meager coffers about $3,000 to assemble a defence, then he dropped his (sure to lose) case.
Past the screaming engines on Dynajet’s dynometer, and off to the artwork exhibit where Mann’s posters, art books, patches etc were for sale. One painting in particular caught my attention: a solo rider with his shadow cast on the rock face—with the shade of a lost love on his empty pillion. Quite something to view the original art I had pored over as a neophyte chopster.
A display of ‘101’ Indians got my attention, the rigidly mounted seats giving them away as wall of Death bikes. Wahl E. Walker (Americanwallofdeath.com) proved a mine of information on barrel riding, relating how King, a full-grown lion who occupied a sidecar on the wall, had to be shot to release the hand of a drunk who had been showing off by poking him in his cage. I could have spent all day b.s.-ing with Wahl. I would have liked a word with Micah McCloskey too, whose ’40 Chief bobber has my front brake on his leaf springer (from about 35 years ago on the 3 Flag Run).
Off to rehydrate while listening to the ‘Preachers Blues Band’ at the beer wagon which had Guinness and Newcastle Brown (miner’s ruin loony soup) on tap. Next a chat with Dean and Mark whose stall featured copies of ‘Motorcycho’, Langlitz leathers, and a bright red Nazi-style beanie (thanks, but no thanks, for the offer of a Coors piss-water beer).
Unusual rides included a Corvair-engined trike, a Harley trike whose trailer was a miniature cop car, and a heavily modified one-lung Ironhead Sporty. Roller derby cuties on skates, an ‘I’d Fuck Me’ T-shirt, and all manner of patches (largely Hispanic and local), bubble-breasted trophy bimbos and large, long-bearded boyfriend. Ah, only in America.
On the way back to L. A. counting broken down, too-rad chops, and cops happily ticketing the too-fast. Next up the Long Beach Show, Friday 17th December. 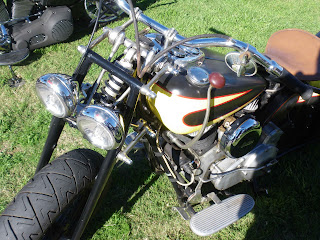 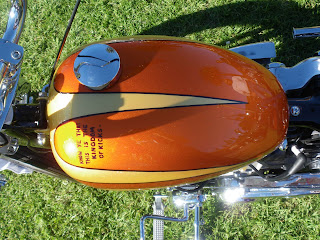 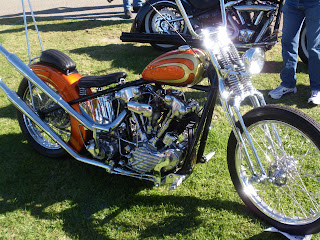 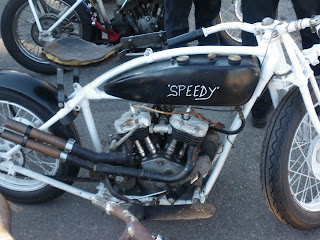 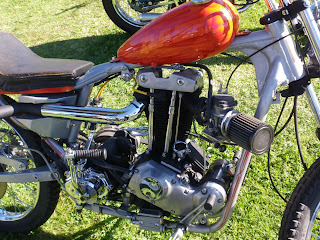