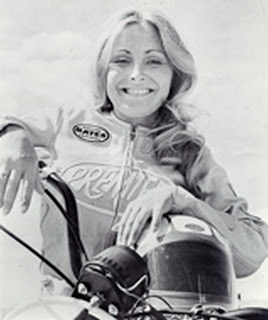 The Daredevil Is a Woman
The Debbie Lawler Story
written by Steve Mandich
Debbie Lawler was the most prolific female motorcyle jumper of the 1970s, if not of all-time. She was the third most-popular motorcycle jumper of her era, following Evel Knievel (of course) and Super Joe Einhorn. Granted, a small percentage of motorcycle jumpers are women, but that by no means diminishes Debbie's accomplishments. In fact, "The Queen of the Motorcycle Jumpers" once broke one of Evel Knievel's inter-gender jumping records.
With her blue-and-white helmet, lucky orange bra, and pink hearts sewn all over her snug, baby-blue leathers, "The Flying Angel" was often asked why such a pretty girl would perform dangerous stunts. The shapely (35-25-34) yet petite (five-foot-two, 106-pounds), blue-eyed blonde replied, "I like the feeling of freedom. It's like flying over the highest mountains."
Debbie was born in Grant's Pass, Oregon, in December 1952. The daughter of motorcycle racing champ Ben Lawler, Debbie took her first ride on the handlebars of her dad's bike at age nine. After her family moved to Arizona, she got her first motorcycle on her 12th birthday and began racing at 14. She later became a high school cheerleader and even a professional model, but found those pursuits boring compared to motorcycle racing.
Enter Charles Samples, former manager of Phoenix-based motorcycle jumpers Gary Davis and Rex Blackwell, a duo who comprised the "Astro Jumpers." Davis and Blackwell eventually quit the Astro Jumpers following disputes with Samples, who then "discovered" Debbie. Samples became Debbie's manager, teaching her how to jump and carefully crafting her girlish image.
"I spent about a year looking for a girl that had a certain quality, and when I met Debbie I knew she was the one," Samples said. "I needed someone who was pretty and looked like she had never been on a motorcycle before. We do get a lot of response from people who find it hard to imagine a small girl jumping cars on a motorcycle."
Indeed, Debbie's appearance was often a surprise to her audiences. "The crowd expects to see a 300-pound woman with tattoos and a chain hanging out of her hip pocket," she said. "They don't expect me."
Debbie began jumping in 1972 at fairs and speedways across the country, soon earning much more than she ever made as a model. On March 31, 1973, at the Beeline Dragway in Phoenix, Debbie jumped her Suzuki 76 feet over a line of parked cars. An outfit called Motor Sports International declared her feat the "World Record for Motorcycle Distance Jumping -- Female."
Then, on February 3, 1974, ABC's Wide World of Sports was on hand at the Houston Astrodome to tape the National Championship Indoor Motorcycle Race, and Wide World also covered Debbie's jump. The 21-year-old earned her biggest exposure to date as she bettered Evel's indoor vehicular record. Her 101-foot leap over 16 Chevy pickups earned her a spot in the Guinness book (though it curiously referred to her "The Smiling Angel" and "The Lesser Evel," nicknames not heard elsewhere).

The Guinness Book of World Records, 1975 edition.
When asked about the new record by WWOS host Jim McKay, Evel derisively replied, "I can spit farther than that." He reclaimed the record the following month, clearing 17 vehicles at the Portland Memorial Coliseum. Debbie, ever the good sport, was among the event's 8,000 spectators. She gushed afterwards, "It was a beautiful jump, just beautiful."
Despite losing the record, Debbie was a sensation. She appeared on the TV game show What's My Line? and in print ads for Eagle Tires. In response to Ideal's successful Knievel toys, Kenner released the "Debbie Lawler Daredevil Jump Set," reasoning that girls would demand a line of stunt toys that they too could identify with. The Debbie doll had a big pink heart on her white helmet, with her golden plastic mane flowing out over her white jumpsuit. Her cycle was primarily green, with shiny plastic faux-chrome machinery and another big pink heart emblazoned on the side. The toy's packaging depicted a small girl at the helm of the wind-up crankcase that made little Debbie's cycle go. The back of the toy's box illustrated "Wild Rider Action!", eight positions that Debbie could be mounted on the cycle.
She also received her own chapter in the Joe Scalzo book Evel Knievel and Other Daredevils (Grosset and Dunlap, 1974). "No terrible scars or ugly pavement rash mar her delicate features yet," Scalzo wrote. "Certainly she is the most attractive of all motorcycle daredevils."
While Scalzo was merely stating the obvious, also revealed a Debbie previously unknown to her public: her favorite food was fried chicken, and she was an expert water skier and aspiring actress. He depicted this apparent "wild woman" as a sweet, wholesome, old-fashioned girl who loved children and the elderly. She also lived cleanly, except for the two packs of cigarettes she smoked daily.
Scalzo quoted Debbie at length, further exposing her personal side. "All I can say is, I never wear a bra," she said, except one: "I won't jump without my lucky bra. I just won't jump without it. It's a real dainty French thing. I'm superstitious about it. I won't jump without it or my manager being right there."
On the more obsessive-compulsive side, Debbie admitted, "Oh, I'm always taking showers. I seem to spend most of my time taking showers."
But don't get the impression she was a complete nut: "I love cooking and sewing. I get up in the morning, take a shower, do my nails, and watch TV. And, I create."
To wit: "Love is a beautiful thing that comes on wings/ But leaves with tears/ But memory of love is an ever-burning ember."
Television could sometimes be a distraction. "The first time I jumped, over at Tucson, I'd brought a portable TV along with me," said Debbie. "But I was sitting there watching Sanford and Son and forgot all about jumping. They had to come remind me."
Though Debbie might've been the Amelia Earhart of motorcycle jumpers, she certainly wasn't its Gloria Steinem: "I'm no woman's libber. I like men."
So, how about those men? "Well, I've had trouble as far as dating goes. I have some boyfriends, of course. I like the masculine male. But boys find out what I do, that I jump a motorcycle over cars, and they don't like it at all. I guess they don't want to see me get splattered around. Or maybe they don't like the competition."
Debbie didn't like the competition either. "In my mind I recognize no other male jumper. Evel Knievel started it all and as long as he is around, that's it. My thing is not to compete with Evel at all. Knievel is the king of jumpers, right? Well, I'm the queen. And a queen can't beat the king -- it's impossible. And I don't like to compete against men anyway. I'm a girl." 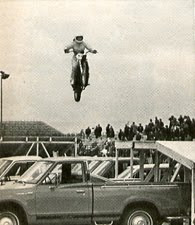 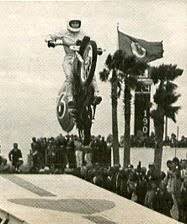 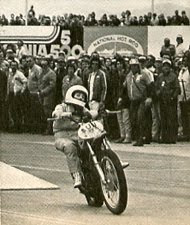 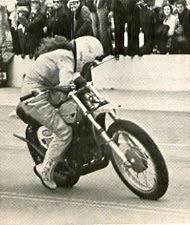 Hang on!
Debbie's next jump occurred on March 4, 1974 at the Ontario Motor Speedway in Southern California. This time dressed in pink leathers, she would attempt her longest-ever jump: 104 feet over 15 Datsuns. Wide World was again present, along with 10,000 spectators. Unfortunately, a 30-mph tailwind helped in pushing Debbie 145 feet before her cycle's rear wheel hit the bottom of the landing ramp. She was thrown from her bike, smashed onto the pavement, and tumbled 150 feet into a concrete wall. She suffered multiple abrasions and contusions and three fractured vertebrae, hardly worth her $5,000 payday.
She spent a week in the hospital, and then on April 5, she was a wheelchair-bound guest on The Mike Douglas Show, where Evel dropped in as a surprise guest. Around the same time, while recuperating in her Phoenix home, she was interviewed by People magazine. "What I'd really love to do is jump my bike over two destroyers," she explained. "You know, those great big naval boats?"
Debbie didn't appear again until June 1976, albeit as a color commentator on CBS Sports Spectacular. She offered her insights as Super Joe Einhorn beat Evel's best-ever jump, clearing 15 buses at Buffalo's Lancaster Speedway.
This is pretty much where the story ends, as about the only other thing I've heard since then was that she supposedly lives in the Southwest and owns a chain of restaurants. Still, there's no doubt that Debbie Lawler has been an inspiration to the female motorcycle jumpers who've followed in her skidmarks, most notably Rena Hart, Teri Kezar, Janet Lee, Debbie Evans, Linda Beckley, Fiona Beale and Jamie Pamatuan. She was also likely the basis for Tracey Butler (a.k.a. "The Lavender Lady"), Evel's fictional rival in the '73 TV pilot Evel Knievel.
Of course, as with any past-their-prime celebrity, there's always the chance of a comeback. But it's doubtful.
"I can't jump cars forever," she told People in 1974. "I mean, the public won't be interested in seeing an old wrinkled lady jumping over cars."
Don't be so sure, Debbie. 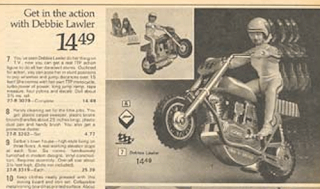 I would like to find the toy daredveil Debbie from when I was a kid.. any ideas where I could?