Heading north on 101, also known as El Camino Real or royal road, the first one to Southern California, I was wondering where all the bikes were.  Then a pack of twenty or so choppers roared up from behind splitting lanes on both sides.  Ol’ skool Knucks, Pans, and Trumpets with young riders: not a muffler, front fender or brake between them—talk about ‘Let’s do the time-warp again’.  They could only have one destination; Ventura County Fairgrounds and the 9th annual ‘Dave Mann Chopperfest’, so I tagged along.
Sea mist burned off and the sun came out, igniting chrome forks, metal-flake tanks and helmets.  Like most chopper fans back in the day, I encountered Dave’s biker art in early ‘Easyriders’.  Although a tad crude compared to his later work, he did their centrefolds for twenty-five years, the spirit shone through—this was the real McCoy. 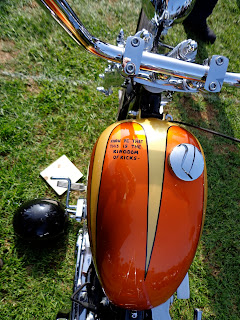 Art became reality in the form of a parked ’47 Knuckle straight from his canvas.  It was identical, if not the actual bike model, down to the ‘Know ye this is the kingdom of kicks’ on the wildly painted tank.  In contrast, Leroy Yoder’s unrestored ’29 Indian Four and immaculate ’35 Chief graced the display area, and they were not alone.  I got to talking with ‘Laughing Indian’ member, Roger Herbison, over his ’36 framed mid-‘40s Chief.  He had acquired his nickname, ‘Chief Two-Kicks’, from its ability to fire up on the second stroke anywhere, anytime.  Other Chiefs present included a ’46 with aerodraulic front end and Edison-Splitdorf magneto, but no Sport Scouts or ‘101’s.
Brits were represented by a restored ’52 Norton International which ran, albeit smokily.  A ’60 ‘Rolling Oilfield’ Meteor bobber sat on offer at $3,700, plus a ’53 Mark II Squariel with several Triumphs, Nortons, but not a Beezer in sight. 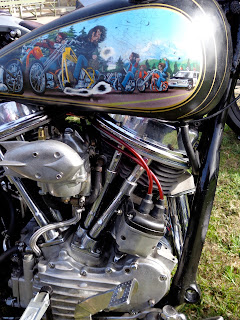 ‘Brand X’ dominated, including a ’40, 86” Knuck running two 40mm Amals.  A’49 Pan featured faded Dave Mann tank art and loud, shorty megaphones.  A Shovel chop’s tank had wilder paint: its ‘Hippy Killer’ motto was kinda wild too.  However, for real wild the scoots with square section, treadless drag slicks took some beating.  I guess it never rains in California and there are no corners. One trick I’d never seen before was a small lever atop a Fairbanks-Morse magneto that opened up the points gap to retard ignition for starting—smart. 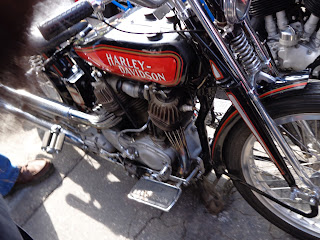 Best Harley had to be an ex-‘Boozefighter’ ‘25/’28 JDH with a BSA tranny and early Hurst-Airheart discs.  I recognized it as ‘JD’ John Cameron’s (deceased) ride, and his grandson, Greg, fired it up.  What a roar, then a lazy, mechanically silent tickover—lovely.  Harley banned JDHs from the track because they kept beating their new Knuckleheads.  Of similar vintage was a rusty ’29 Ford hot rod pickup: never mind ‘Boozefighter’, this must have been a moonshiner’s, a clue being the complete copper still in the box.  From four wheels to three, a 164 cube Corvair trike with a VW transaxle caught my eye.  Actor and hot rod innovator, Norm Grabowski, used to run ‘Six Pack’, a two-wheeler in an 841 Indian shafty chassis.  Maybe they only get about 25mpg, but they get there kinda fast. 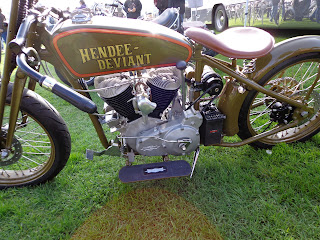 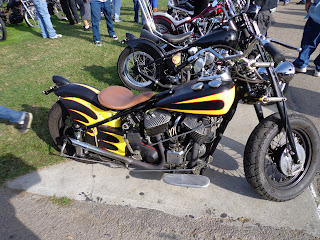 So, off to the display hall with various biker artists in addition to Dave’s work.  Jack Knight, ex of ‘Supercycle’ centerfolds, got my attention as did some very professional work by David Uhl , including an elephant-mounted safari complete with a teens Harley V-twin strapped to the side of one poor pachyderm.  Plenty of Dave’s stuff present with photos, art books, his riding jacket, and another bike from one of his later centerfolds.
Another hall had cute roller derby gals belting around, and each other, adding a little sex and violence to the mix.  Not to forget alcohol; Sierra Nevada pale ale at $8 for a big plastic cup with sun-induced lineups.
For those interested, colours flown included: Monks (all brand new), Deacons, West Coat Weasels, Early Riders (old guys on young bikes), Carnales, Viet Vets, Marines Semper Fi, Soldiers for Christ and Bikers for Christ.
So, back to L.A. with the Goodyear Blimp bumbling overhead and none of the usual six-lane wide traffic jams—sweet!