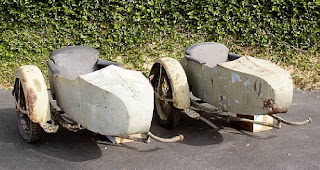 Auction house Bonhams & Butterfields will be offering up a unique selection of motorcycles, cars and memorabilia from the collection of famed stuntman and Triumph dealer Bud Ekins at the Peterson Automotive Museum on Saturday, Nov. 13, 2010. This should be an interesting sale, offering up items like a five-page letter from actor Steve McQueen, a lathe and a bandsaw used by Ekins and striped by Von Dutch, and this pair of sidecars prepared by Ekins and used in The Great Escape, starring Steve McQueen.

Ekins, who died in 2007 at the age of 77, was famous for being McQueen’s double in The Great Escape; it was Ekins who made the famous jump over the wire fence, not McQueen. And while best known as McQueen’s stuntman double, Ekins was an accomplished rider whose racing career included competing in seven International Six Days Trial (ISDT) events in the 1960s, winning four gold medals and one silver — all on Triumph motorcycles.

In 1964, Ekins, his brother Dave, Cliff Coleman, John Steen and McQueen led the international competition in the ISDT in Germany before McQueen suffered a crash and then Ekins broke his leg. After retiring from the movies, Ekins went on to be one of the country’s leading collectors of vintage and rare motorcycles. At one time, his collection numbered over 150 motorcycles and was considered to be the most valuable in the country.

Email ThisBlogThis!Share to TwitterShare to FacebookShare to Pinterest
Labels: Auction