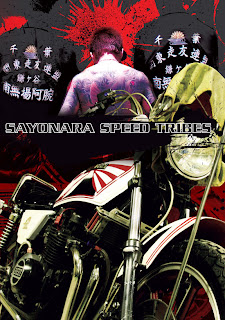 We published an interview with Jamie Morris a couple issue ago.
Looks like the DVD will finally be released! Stay tuned!

Since the late 1970s, Bosozoku biker gangs have cruised Japan's streets and battled rival gangs on thunderous, customized bikes. Infamous for their kamikaze-style flight suits, their use of nationalist imagery and their customized motorcycles, these young bikers form a distinctive sub-culture in one of the most conformist societies in the world, earning them a place as public enemy number one.


"Sayonara Speed Tribes" is the story of Hazuki, the legendary leader of the infamous Specter gang that ruled much of Tokyo in the 1990s. Now retired, with few options outside the criminal underworld, he clings to the Bosozoku tradition and mentors a fresh crop of less-than-enthusiastic gangsters. Hazuki's journey, set against the backdrop of the Bosozoku's final days, offers viewers a unique insight into a colorful but little-known and fading sub-culture of Japan. The documentary explores Bosozoku tradition and history by combing striking footage of bike runs with interviews of police, academics and the Bosozoku themselves.
Hazuki's story is a haunting reminder that, for some us, the best days are quite possibly in the past.