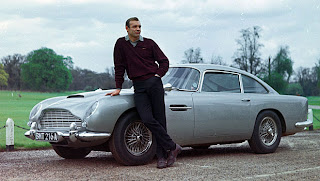 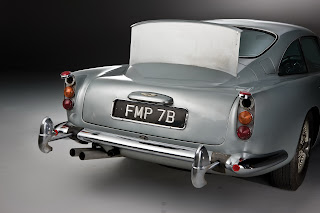 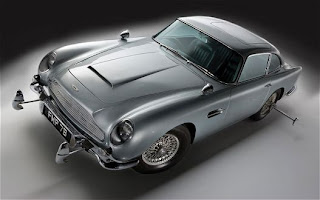 I saw on the news the other day that one of the original James Bond cars sold for over 4 million! Possbily the greatest show business car of them all (and the Batmobile), I remember as a kid that a local restaurant that our family would go to on special occasions had an original James Bond car out front in a glass case. I always remembering spending a few minutes oogling it before we went into the restaurant. Seeing the newscast made me think about that car and whether the one for sale may have been that car! Seems there were 4 all together: 2 used in filming and 2 used in promotional stuff.

The Road Car (chassis number DP/2161/1): This car belonged to Aston Martin; it was the DB5 prototype, a modified DB4. It was referred to as the Road Car because it was used in the driving scenes in the movie.

In 1968, Aston Martin stripped it of all of its gadgets and sold it to Gavin Keyzar as a used car displaying 50,000 miles on the odometer. A year later, Keyzar had a company in the south of England reinstall all the gadgets to capitalize on the car's history.

In 1971, he sold it to Richard Loose of Utah. It had a very brief appearance in the movie Cannonball Run.

Loose retired in 1987 and decided to sell the DB5 and a 1937 Rolls-Royce Phantom III, also used in Goldfinger, at a Sotheby's auction in New York.

Anthony Pugliese, a developer from Florida, purchased the car for $275,000 US.

Jack Grundy of Grundy Insurance told me last week that a very reputable appraiser put a value of $4 million on the car and Grundy insured it for $3.2 million, 80 per cent of the appraisal.

In 1997, the car was stolen from an aircraft hangar in Boca Raton, Fla. The circumstances of the theft were very suspicious. The car has never been seen since, and I suspect that it was destroyed.

Grundy paid the claim. The local community was shaken but not stirred!

The Gadget Car (chassis number DB5/1486/R): This car also belonged to Aston Martin and was used in the movies for all of the special effects.

All the gadgets were removed in 1968, and the car was sold to Jerry Lee in the United States. When Lee went to England to view the car, it looked very grim. Aston Martin spruced it up and Lee took it back to the States.

It was displayed at a few shows until it was damaged at a show in Memphis, Tenn. Lee was furious and vowed that it would never be displayed again.

In 1977, the chairman of Aston Martin USA asked Lee if he would allow the car to be displayed at the New York Auto Show. Aston Martin would pay for the gadgets to be reinstalled. It was a huge success and the car was displayed one more time in 1981. It now lives in a special wing of Lee's house and has never been publicly displayed since.

Here's what happened to the two publicity cars:

One year later, a friend of his, Sandy Luscombe-Whyte, asked Bamford to sell one of the cars to him. Luscombe-Whyte traded a 1964 Ferrari 250 GTO in a straight swap for the DB5. Bamford still has the Ferrari to this day -- it has to be worth about $10 million.

After four months of having fun with it, Luscombe-Whyte advertised the car in the Times newspaper in London. Frank Baker of Vancouver made him an offer he could not refuse: $21,600 and an all-expenses-paid trip on the QE2 to New York.

Luscombe-Whyte would deliver the car from Montreal, driving it across Canada to Vancouver.

The car spent the next 13 years on display outside Baker's Attic Restaurant in West Vancouver. Baker fell upon hard times in the early '80s and sold the car to Alf Spence.

Spence sold it to a consortium headed by Ernest Hartz of San Francisco. The DB5 was offered for sale; they were hoping to get $165,000 but received a high bid of $80,000.

The new owner was the racecar driver Bob Bondurant. He sold it one year later to Robert Pass of Pass Transportation. Five months later, Pass sold it to Robert Littman. When Littman discovered it was not the car used in the movies, he was very disappointed. It ended up in a Jaguar dealership in New Jersey.

In 1989 the dealership went into receivership. DB5/2017/R disappeared, only to surface in the Louman Collection in the National Automobile Museum, Raamadonksveer, Holland, where it remains until this day.

Publicity Car 2 (chassis number DB5/2008/R): Bamford kept the other car of the pair manufactured for Eon Productions and had some fun with it until the news of the sale of the Road Car hit the press.

It was 1971 and time to cash in. Bamford sold the car to Bruce Atchley, the owner of the Smoky Mountain Car Museum in Pigeon Forge, Tenn. Atchley wanted it for his son, Hugh.

The car was installed inside an iron-barred cage and was displayed from 1971 until 2006.

RM Auctions of Blenheim, Ont., was given the task of preparing the car in its workshop for sale, ensuring that all of the gadgets worked.

I was at the auction last month in Phoenix, Ariz. The car was driven into a darkened ballroom by Terry Lobzun of RM -- with the machine-guns omitting a rat-tat-tat just like in the movie -- to great fanfare and applause.

The hammer fell at $2.4 million. I have since learned that DB5/2008/R will have a new home in Switzerland.

For many years, all four cars resided in North America. The number has now been reduced to one, and that car is without question the only remaining survivor of the pair used in the original movies.

No other car has attracted so much attention for a combined 13 minutes of footage.

I have only touched the surface of this incredible story involving the four cars.

Dave Worrell has spent a lifetime researching this topic. If you have an interest in the Bond vehicles, reading his book is a must. For more information and details of how to order a copy, visit www.bondbooks.biz.

i had the hot wheels version! wiht functional ejector seat!